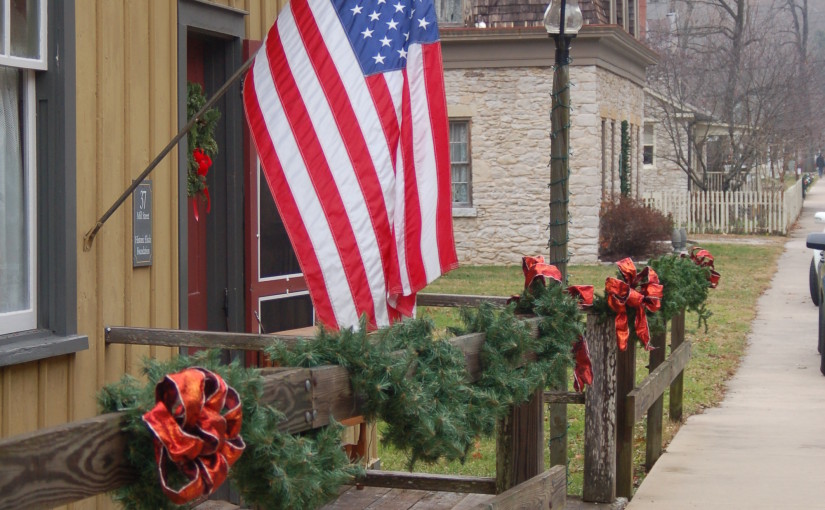 In his capacity as Republican boss of Elsah, Dr. Farley undertook in 1885 to construct the long building across the creek from his home. Very quickly it became known as the “Music Hall” or “Farley’s Dance Hall.” In spite of the protests of the Democrats, the hall became a center of village activity, including visits from wandering Indian medicine shows, meetings of the literary clubs, church socials, school plays, and all sorts of dances.

Early in the twentieth century, the Knights of Pythias bought the Hall and added the second floor.  Since its early days, it was the Methodist Hall and an antique shop.

After the 1993 Flood, Historic Elsah Foundation purchased Farley Music Hall.  This purchase was made possible by a specific donation for that purpose.  The building was badly damaged from the flood.  So, the purchase was only phase one of a major restoration project.  More details are available in Elsah History newsletter, Issue 70 and 71 about the restoration.

With the grants from the National Trust for Historic Preservation and the Illinois Historic Preservation Agency the building was stabilized and brought back to life. Furthermore, it was discovered that in the downstairs room, there was original interior painting under the yellow paint.  The original interior paint was a milk paint.  It was not affected by the more modern paint.  With care the yellow paint was removed and the original milk paint was once again on view.

Farley Music Hall is a unique building and meeting place both for the Village and the region. Mike Jackson, chief architect for the Illinois Historic Preservation Agency, cites this building and Elsah as models for historic preservation in small towns and villages in Illinois. Visitors and residents appreciate the feeling of the past that is evoked by the Village through active use of its historic buildings. Farley Music Hall is located at 37 Mill Street.